“Every great work of art has two faces: one toward its own time and one toward the future, toward eternity.
Daniel Barenboim

“Think of the future that awaits you, think about what you can do and do not fear anything.”
Rita Levi Montalcini

Along with science (and technology), art has always been the most advanced sphere of research in human thought. lt is a ﬁeld that allows us to imagine new realms of reality. As Kandinsky said, it has the quality of transgressing the boundaries within which time would Iike to confine it, and so forecasts the content of the future. Therefore, art is the imperfect science of the imagination, which allows hypotheses — and sometimes even prophecies — to be formed about the world of tomorrow. Like science, it has the capacity to prefigure reality, because everything that exists, every item and every form produced by humanity must first have been conceived in the mind. Similarly, many of the things that have been envisaged have gone on to exist in real life.
However, unlike the related field of Technics, art is not a strictly utilitarian sphere. Only rarely are artistic creations converted into everyday items, tools or applications. It may weII be for this reason that companies which invest in art are stili few and far between in the industrial production scene. ln contrast, the alliance between art and fashion seems perfectly natural. In the Iast decade, brands such as Prada, Trussardi, Louis Vuitton and Max Mara have played a big part in the promotion of exhibitions by international artists. The efforts by Guidi Srl to take a similar approach have been both more complex and more courageous. For some years now, the leading marine accessories manufacturer has been working very fruitfully with artists of the calibre of Michelangelo Pistoletto, Chris Gilmour, Marco Lodola and Jill Mathis.
The initiative was the brainchild of Bruno Guidi, an entrepreneur who founded the company of the same name. He realized that contemporary art had great potential to act as a catalyst in the boat industry. With its annual exhibition initiatives, Guidi Srl is now helping to redefine the concept of patronage in the sector.
Bruno Guidi believes that a quick-fire exchange of input and incentives between art and industrial production can lead to the creation of a new, integrated outlook on the world. It is a view that incidentally also also work in favour of the economy and “belongs to those who believe in the beauty of their dreams,“ as Eleanor Roosevelt said.
The new patronage: envisaging the future is the title of a new project that is being promoted by Guidi Srl for the Galata Museum in Genoa. lt will feature previously unseen works by Jill Mathis and Marco Lodola.
Last year, the exhibition project in Palazzo Ducale focused on rediscovering the company‘s roots (with Chris Gilmour’s 100% cardboard reproduction of a magniﬁcent old yacht made by the boat builder Camuffo) and highlighting the value of Guidi Srl’s human capital (with contrasting photographs by Jill Mathis of workers’ hands and craftsmen plying their trade). This year, the goal is to produce an identikit of the future based on the present. After all, ad the philosopher Gottfried Wilhelm Leibniz said, “the present is pregnant with the future”. 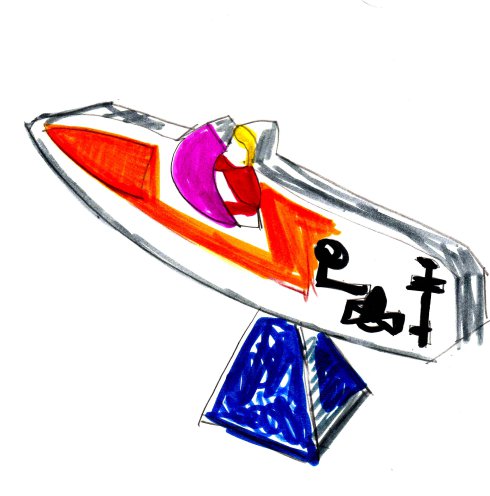 Guidi Srl’s current output is portrayed in pictures by the American photographer Jill Mathis. This is her third collaboration with the Grignasco-based company, following on from the Industry exhibition in 2011 and Gilmour & Mathis in 2013. The artist was inspired by the black and white photography of the New Deal and the New York School. She has developed a personal approach based on luminist contrasts with a purely pictorial feel that enables her to give body and soul to her industrial still lives.
When seen through Jill Mathis’s eyes, pipe couplings and unions, filters, sleeves, pumps, valves, thru-hulls, scuppers. greasers, distributors, seacocks, plugs, nuts and manifolds all become stationary, statuesque elements sculpted by crystal clear light that is reminiscent of the brightness in early 20th century ltalian paintings, somewhere between Magic Realism and New Objectivity. The pictures are highly reminiscent of the avant-garde aesthetics of the last century, with hints of the silent atmospheres of Metaphysical Art and the imagery in the futurist poetry of Farfa (the pen name of Vittorio Osvaldo Tommasini), who wrote the eternal verses of Tuberie (Piping) (*) about pipes of every shape, size and purpose. While Jill Mathis’s work starts out by faithfully interpreting reality and accurately documenting shapes and masses, it nonetheless manages to emphasize the expressive character of the items thanks to the distinctive slant of the shots and the masterful use of light. It almost feels as if the American artist is capable of drawing out the “human” imprinting of the shapes, along with the passion shown by their designers. She seems to have the magical ability with her refined luminist sublimation to bring to the fore the intensity of the emotions aroused by the intended purpose of the equipment.
Meanwhile, Marco Lodola has taken on the task of creating a work that conveys the intrinsic dynamism of Bruno Guidi’s company in a realm that ventures beyond the present. The artist has pictured a motorboat from the future: a vessel of light that appears to speed across the waves like a powerful electric wake. Lodola is one of the most captivating Italian artists and he has made light his main means of expression. His fervid imagination has begotten a Neo-Futurist, postmodern chimera in a scintillating vision of mind-blowing freedom.
The artist took inspiration from music and sport during the making of his dazzling boat. He listened to songs suck as Surﬁn’ Bird by The Trashmen and I’m Shipping up to Boston by the Dropkick Murphys, and reflected on the footballer Paul Pogba’s sudden spurts of athletic prowess. While all of these elements might be deemed mundane, they were building blocks in the construction of a fluid, dynamic image of the future in which technology finally merges with beauty and elegance.
His work is named Surfin’ Bird after the song, which is part of the soundtrack of the film Full Metal Jacket.  Rather than just a simple light box filled with LEDs, it is a sculpture criss-crossed with iridescent motifs and vibrant arabesques in a form of electric utopia that combines the futuristic concepts of Nikola Tesla and Filippo Tommaso Marinetti with the vaguely retro atmosphere of festive processions and provincial fanfairs. Lodola is an electric alchemist and a maker of engines of light: a homo faber who embodies the ancient and modern essences of Italian genius, constantly treading the line between tradition and innovation.
With their different points of view and antithetical forms of expression, Jill Mathis and Marco Lodola have once again shown that — with the backing of enlightened patrons — art and industry can and must contribute in the establishment of a holistic production model that combines the thrust of technological progress with the inventiveness and creativity of art. After all, in the words of the renowned authority on design culture Bruno Munari, “art is continuous research, assimilation of past experiences, and the addition of new experiences in form, contents, materials, techniques and means”.