Paolo Ventura was born in Milan in 1968 and currently resides with his family in a small village in Tuscany. His unique and inventive approach to photography is inspired by loosely historical or entirely fabricated narratives.

Growing up his father, a children’s book author, would regale Ventura and his twin brother with stories. Many of these were embedded in Ventura’s consciousness and re-emerged later, as visual depictions in his work. 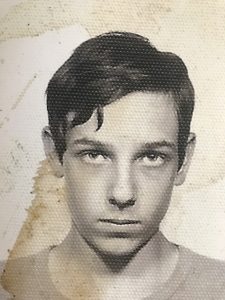 Ventura’s process is complex and relies heavily on the creation of sets and enlisting actors to tell his stories. He begins by sketching ideas and then fabricates elaborate dioramas made out of simple materials. He and his family including his twin brother, wife and son, play the characters, dressed up in working-class suits, war uniforms or clown costumes. Once everything is in place, Ventura’s final step is taking the photograph. His narratives can unfold within a single photograph or play out over several tableaux. In his most recent works including those featured in this exhibition, Ventura adds another dimension by painting over sections of his photographs and collaging on human figures. Sometimes the same character is repeated several times, implying a dream-like state of confusion.

Ventura’s work oscillates between reality and illusion as well as the historical and contemporary. It evokes elements found in both Italian surrealist painting and mid-20th-century Neorealist film. Theatre is not only an integral part of his process but a recurring theme in his work. He was commissioned to design the sets of two major operas, Rodgers & Hammerstein’s Carousel in 2015 and Ruggero Leoncavallo’s Pagliacci in 2017, for which he received great acclaim.

Paolo Ventura studied at the Accademia di Belle Arti di Brera in Milan in the early 1990s. His work has been exhibited internationally including at the Forma International Center for Photography, Milan, Museum of Contemporary Art of Roma and The Hague Museum of Photography. In 2011, he was selected to create a series of works for the Italian pavilion at the 54th Venice Biennale.